Trey and Mike quoted Little Squirrel throughout the first set (after Olivia’s Pool, and during Axilla and Weekapaug Groove), and during the final vocal chorus of Reba. Trey teased Martian Monster in Mike’s Song and Who Knows in I Always Wanted It This Way. Reba contained a verse with an Ass Handed quote by Trey in the final vocal chorus. Trey teased Tweezer during Sand. 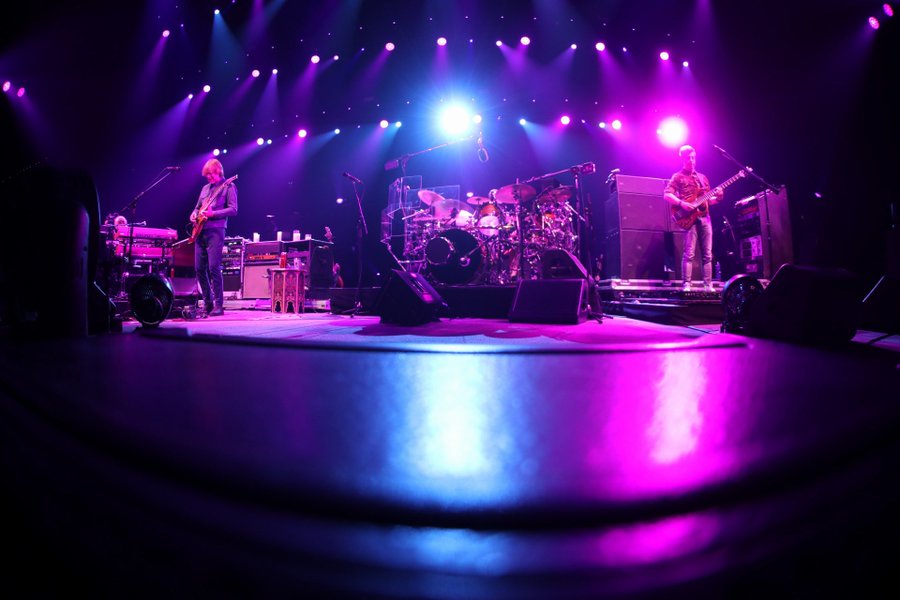 A Picture of Nectar 2

Upon listening to this show, you may be left with certain questions. Among these are:

- Are we living in a post-set era?

- Can Phish play a first set so hot that they themselves could not play it?

These are troublesome queries, not easily untangled. If you look to the band for answers, they'll smile (evilly) and unfold another previously uncharted dimension from within the weird outro of Axilla II or something and that's no help really.

This show has answers, perhaps, or at least clues, but they're clues to questions the fanbase the fanbase doesn't even know to ask currently. The band is usually at least one step ahead of us; this tour, it feels like nine or ten.

No matter. Welcome to the future. Lay back, enjoy your complimentary nootropic snow cone, and let the state of the art in jam wash over you, from the aforementioned Axilla II with it's far-reaching scope and rave-up ending to the cyberpunk disco of Tweezer. From the Martian Monster stomp of Mike's Song to the cyclotron spin at the end of Walk Away.

We hope you had a good time!

I’m going to be brief. This was an incredible show. They didn’t walk away from any song (see what I did there?) start to finish, putting extra flourishes everywhere they could, even on Ass Handed and Sigma Oasis. Pretty crisp on the challenging segments of songs like Reba. They were patient with the jams, high energy and flowing. I really liked the song choices, but that’s my bias as I was able to tick off several I wanted to hear.
Score: 11
2021-10-30 6:44 am, attached to 2021-10-29

phish is crazy right now man. another barnburner of a show.

the first sets recently have been just beyond belief. last night was perhaps the best first set i've ever seen; this one is nearly as good. there was a 20-minute, type 2 axilla II for god's sake. unbelievable. the mike's groove was also top tier--mike's song itself went proper type 2, as did weekapaug. the final two choices, on paper, don't look as ideal as the rest of the set. however, shade was short and sweet, and IAWITW was easily the best version ever and a highlight of the set. absolutely soaring type 2 jam. must listen.

set 2 begins with another shocking jam situation--a jammed Ass Handed. they are literally jamming every single song right now--during this show every song was jammed, and nearly all type 2, except Olivia's Pool, Hydrogen, Shade and Funky Bitch (although FB did contain sweet solos from page and trey). the tweezer is typically excellent, with a beautiful quick change to Funky Bitch. huge huge fan of a set 2 reba, and this one got out into exploration territory for a moment before building to an awesome peak. Sand -> return to Tweezer honestly speaks for itself; it was fucking awesome. and then a (somewhat abrupt, but) very nice segue into an absolutely raging sigma oasis, which i was certain would close the set. but nope! phish once again surprises, throwing in a walk away for good measure.

Julius and Tweeprise standard great for the encore.

First off, they let me bring a glass bottle of Jack Daniels into the venue while not allowing my buddy to bring in a water bottle cap-- can you believe that?? Only in Vegas.

Prior to the show, me and my show partner were discussing how Axilla hadn't been played in a while-- and how the proximity between Axilla and Axilla (Pt. II)'s most recent performance was minimal. We had a show that didn't disappoint. Mike's Song was easily the highlight of Set I, and Fishman was on one all night. He sounded fantastic and continuously let the band feed off of his energy.

Ass Handed was a cool second set opener, and the Tweezer went deep in itself. Set II picked up with the Funky Bitch and Reba mostly-- both must-listen versions of the song. Julius was an awesome closer too. The environment in the MGM was definitely palpable. What a Halloween run this far!! We'll see you tomorrow night.
Score: 7
2021-11-04 9:38 pm, attached to 2021-10-29

This is my first review....I am writing this because I am blown away by my Vegas Phish Halloween experience and I just have to get this out. Gonna review all 4 shows but starting here because I think that
Night 2 is my favorite of the run and I am listening to it on repeat. But the whole run, jeez, what a treat and I am still reliving the experience....

SET 1: it's just so goddamn amazing that it's hard to describe, especially after N1's 1st set and how they just came out SWINGIN both nights. Fun Olivias, then Axilla II is so great to hear, ethereal, spacey, awesome, and then BAM!! Mikes-> H2 -> Paug is just about as good as you can expect to hear in a 1st set. I don't know a single phan that would be unhappy to hear that trifecta. Shade cooled it down nicely (great love song, might actually be in my brother's upcoming wedding) and then IAWITW well...it just worked. RoboPhish doing what they do best. That song actually killed and I was never even a fan of it, but now I've listened to it twice today.

SET 2: Starts great and never lets up. Ass Handed always fun to hear -- the beginning is really hard to sing along to but Fish told us to -- so we all tried hilariously. But then it gets going and jams like a mahfah! They're just jamming everything now. We all know tonight is the kind of stuff that dreams are made of. Up to the plate steps Tweezer as the hot Ass melts away. People go a little crazy. Myself included. This is my favorite Phish song (I have 10 favorite Phish songs LOL). People around us are gettin the F down. I am dancing real hard. Stays mostly type 1 but fun. But really the best part is last 4 min, sounds like they are gonna bust into Manteca but don't and then there is the coolest outtro...then the last minute...it's cooling down nice and chill and then, is that...a couple teases of Funky Bitch? Cool...then they JUST JUMP RIGHT into that Bitch and it's so hot it is SO HOT. Might be the best thing they played all wknd, FIRE. That transition is perfection. In fact I looked over to my bro and said "perfect". It was. This is getting long and I apologize. But we go from the funkiest Bitch ever into Reba, not perfect composed section but not terrible and who's there for the composed section anyway? But the jam...oh this Reba jam is NOT to be missed. You must listen. Sand gets extra mustard and jams and rocks real good. Tweezer slips back in and then what is this, a pre-Prise? Nice darkness and fun and then Sigma...a song I've been hit over the head with until now I really love it and this version is my favorite ever. The synth Page throws in during the chorus is glorious, you can't not love it. This version simply kills. Walk Away is a long time fave cover of mine and it puts an exclamation point on this fantastic set...what a great song! Julius hot encore and a little extra on Reprise and it's all over.